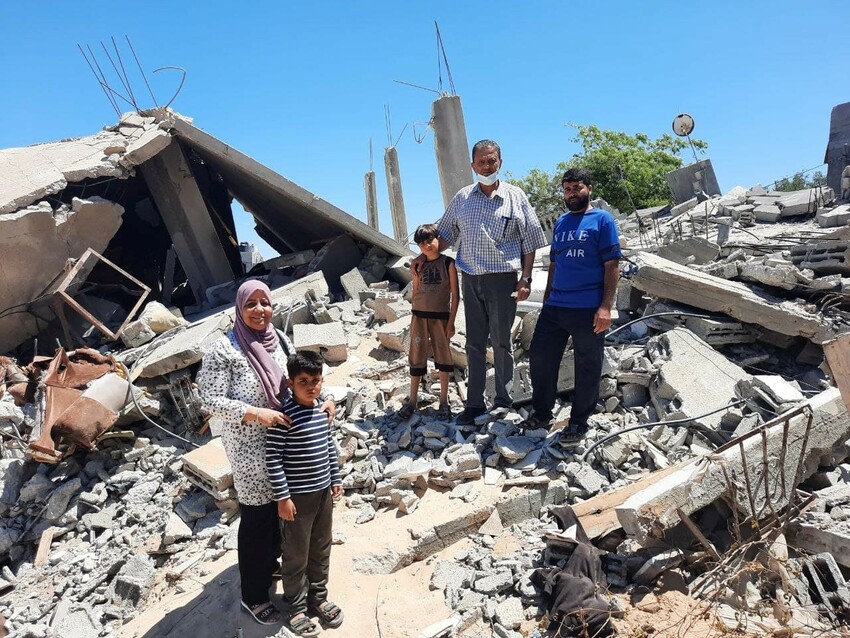 Mohamed Al-Attar (right in blue) lost his wife and children and his home during the violence in Gaza in May 2021. Rifqa Hamalwai (far left) and Khaled Abu Sharek (centre back), staff members from MCC’s local partner Al Najd, visited Mohamed and his nephews, Yaser Dia Al Attar (bottom left) and Ali Tamim Al Attar (back left).

All local COVID-19 protocols were followed in this photo.

Staff from MCC partner in Gaza, Al Najd Development Forum, visited Mohamed Al-Attar (far right). When Al-Attar’s home was destroyed in the May 2021 Israeli bombardment, he lost his wife and three children.

“We have become refugees in our own country,” Al-Attar says. “Me and many people like me have lost their families, children and parents during this conflict… and even the ones who survived are suffering over the things they have lost. They have no place to be.” Since the bombardment, Al-Attar has been able to continue in his teaching position, but he is now trying to support his brothers’ families as well.