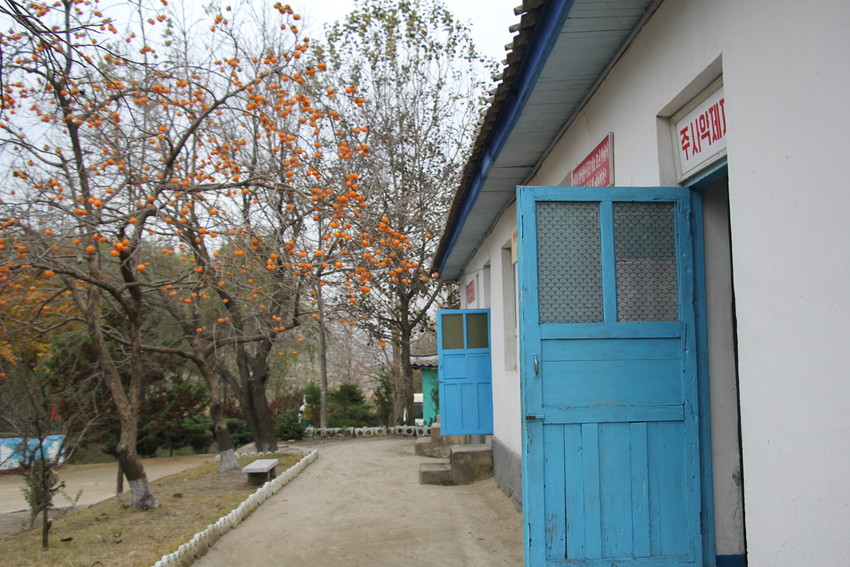 Media caption: A hepatitis care facility in DPRK grows its own persimmons to feed patients. It also receives canned meat from MCC, meeting up to 50 percent of the protein needs of patients. The first door on the right leads to a pharmacy, while the next one leads to the kitchen where food is prepared. (MCC Photo/Jennifer Deibert)

Democratic People's Republic of Korea (DPRK) is an MCC country of sensitivity. While this photo has been vetted and may be used without further checking, please consult the MCC content and vetting policy guidelines before using this photo.

The Kaesong hospital for people affected by hepatitis in Democratic People's Republic of Korea (DPRK), also known as North Korea is one of 30 facilities operated by MCC's U.S. partner, Christian Friends of Korea.

The first door on the right leads to the facility's pharmacy, and the next leads to the kitchen where MCC's canned meat is prepared into nutritious soups which help patients absorb their medications and improve their health.

DPRK is a cold, largely mountainous country with very little usable farmland. In addition, the country faces flooding nearly every year due to typhoons that damage what little land there is further.

In 1996, the country was hit by floods so serious they inundated the coal mines and destroyed farmland, contributing to a famine in the region. In addition, the Soviet Union had broken down and there was a break down in trade relations.

Millions of people died of starvation. Many more were so malnourished they became susceptible to infectious diseases or ended up with long term disabilities.

To this day, citizens struggle to get enough to eat. In 2014, the UN estimated 41.9 per cent of the population was chronically under nourished.